This is an article that tries to explain my experiences of going from home automation novice, working out what I was trying to achieve, working with a specialist installer, implementing and finally living with a functioning home automation system for a few years.

In the early 2000’s I decided to buy a new house. Nothing I saw seemed right and as I worked for a large building contractor and knew a bit about the construction process, decided to widen the search to include those that ‘need some work’.

Eventually, in 2002 I bought a rundown three bedroom cottage in East Sussex, with a view to refurbishing into something that met my requirements, in terms of internal layout, features, materials and so on.

One of the things I wanted was a security system, as in previous years I had spent quite a lot of time working away during the week. Whilst researching the options I (think I) spotted an advert in a magazine. It turned out to be Household Automation and the advert as I recall, talked about security systems for the domestic market and how their system specifically, could be the backbone or infrastructure around which a home automation system could be based.

At the time Household Automation were really, the only company I could find that seemed appropriate. They were a small business based not too far away and were aiming themselves at the domestic market and had the broad range of knowledge and experience to deal with it. There are several companies that can deal with individual aspects, but very few that can effectively deal with them all. I think this is still true today.

Given that I have a bit of interest in the application of IT, this got me thinking about what an automation system is and I would want it do, so I drafted up a list of basic functional requirements and gave HA a call. Numerous discussions followed as I tried to work out quite what I wanted and HA (Andy Ellis) tried to interpret my vague descriptions and formulate some specific proposals.

I soon realised that all an automation system is, is a box of electronics that essentially switches things on and off when it receives a specific combination of inputs and in accordance with a set of instructions that are ‘programmed’ into the system. Those inputs could be a detection of movement, the opening of a door, recognition that light has fallen below a certain level, the time of day and so on.

It then occurred to me that if a security system could sound an alarm when it detected movement in places where there shouldn’t be any and when it was ‘armed’, then it ought to be able to do a range of other things like switch heating and lighting and so on, on and off.

This led to the realisation that the (notionally) security system could control the heating and lighting to simulate occupation in terms of switching lights on and off, keeping the heating levels down and also open and close the curtains, all in accordance with which security ‘state’ had been selected.

How all of this is made to work can be quite complicated, but the principals of what it does are fairly simple.

From this point on there was no going back. Some form of home automation was going to be integrated into the refurbishment. Because the house was quite run down it meant moving out and completely gutting it, which gave the freedom to install a totally new wiring system, concealing almost everything.

Eventually in early 2006, work began. Household Automation drew up the wiring diagrams and costed it all. This was useful for everyone involved in that it provided clarity of exactly what was to go where.

My requirements, or should I say wish list, inevitably grew to incorporate a centralised audio and video system. After some research I came to the conclusion that the technology on the video side was too expensive and probably not as effective as it should be. On the audio side though, I discovered Sonos which did get installed and has worked very well ever since.

The installation went well and HA was professional and proactive throughout, although in the end I got the builders to install the cabling that HA specified as that was a more effective way of working. HA though provided, installed and tested all specialist equipment. Whilst it is based around a security system called Comfort, a lot of other components were integrated with it to provide a seamless whole.

Configuring it all once installed though, was perhaps the hardest part. Making sure it did what it should do and just as importantly, didn’t do what it shouldn’t do was quite a long and sometimes difficult process, but problems always got solved and it ensured I got a thorough and effective system that has needed almost no maintenance or support in the eight years or so that it has been operating.

Household Automation also installed a series of Cat5 sockets around the house to allow computers, televisions, dvd players or any other device, to be connected to the internet.

Along with some speakers mounted in the ceilings of some rooms and shelf speakers in the kitchen I am able to make use of music files stored centrally on a network attached storage box, and played in any one of the three zones currently set up. This is done with Sonos Zone Players and really is very impressive. The sound is good, the ease of set up and operation is good and the support via their website and telephone is also very good.

I use lossless FLAC files on my Sonos system and they are all stored in a separately mapped ‘drive’ on the NAS box rather than on a pc.

So what does my system do? Well,

If there is a single piece of advice I would give to anyone, it is try to think through systematically and logically and to be as clear and explicit in communicating your wishes and requirements as possible. I’m sure Household Automation can help with this and you may need to make adjustments on the back of advice from the experts but be as clear as you can. Be warned though, it can take a bit of effort but you will most certainly reap the rewards.

I’m sure my installation only begins to scratch the surface of what can be done now. I imagine that technology in this area moves pretty fast, as it does in other areas of technology use, but I think I have a reasonable balance between useful technology and cost and if you are in a similar position I would recommend you give Household Automation a call to see how they can help.

Eight years on and I am still glad I went through the process of specifying and installing it. I wouldn’t want to be without it and although it isn’t cheap, if I find myself in a similar position in the future I’d do much the same thing again. 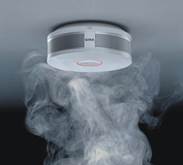 Household Automation explores how British Standards allow for a security alarm to act as a fire alarm.

Most of the major fire detection equipment manufacturers such as AICO and Hockiki offer a range of detector heads that can be connected using 9-24V power from a home automation or alarm panel and provide NC or NO contacts to enable an alarm. In practice this may be very easy to physically achieve but under what circumstances is this allowable?

The details of what is allowable is defined in British Standard BS 5839-6:2004 Fire detection and fire alarm systems for buildings.

A home automation or security system that is used as a fire alarm is classed as Grade C.

So now that we have established where the home automation or security alarm can be used as a fire alarm what are the key points that we need to know in order to comply with a grade C system?

In reality if you are using a home automation system as a fire alarm you need to read and comply with the whole of BS 5839-6:2004. As with any standard there are sections that are very clear and precise and others that are open for interpretation. BS 5839-6: 2004 does however clearly allow the use of systems other than fire alarms to act as fire alarms. This article is by no means comprehensive; we have provided an overview of what is possible. We strongly recommend that anybody looking at installing smoke / fire alarms using a home automation or security system as the main control and interface panel should obtain and comply with the recommendations of BS 5839-6:2004.

Household Automation Ltd has ongoing projects involving the installation of a variety of home automation equipment. We have used the Comfort home automation system as a fire alarm and can provide details of the types of system that would be appropriate for your home. The use of the Comfort system allowed the customer to set up dial out to his mobile (or tel number of his choice) as well as overall control from iPhone or iPad. 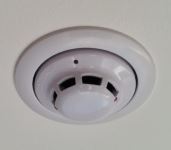 Home automation experts Household Automation Ltd have recently fitted recessed smoke sensors to a home in Surrey. The clients were very specific about the need to provide smoke sensors that were as flush to the ceiling as possible, they did not want to see the conventional large ugly smoke sensors that have become common place in most homes.

The main Comfort alarm panel is operated from the security keypad. Individual smoke heads are identified by name e.g. “Garage smoke”, “Kitchen heat”. Because of the flexibility of the Comfort controller the fire alarm signal is automatically sent to the auto dialer which contacts the telephone numbers programmed into it.

Access can also be gained over the ethernet via browser or mobile app. If required the Comfort controller can be directly connected to a monitoring station.

What we talk about…